When I talk about the diversity of video games out there, Prison Architect is high on my list. It is also a good example of a game that has enormous potential for learning about the criminal justice system and systems thinking. Although I played it on Mac, it’s also available on PC, iPad, Android, PS4, Xbox One, and Xbox 360.

Prison Architect follows in a long line of what might be loosely called ‘god’ simulators, in that they put you in a position of power and control over the land below you. When I was a teenager I spent a long time playing Populous; Civilisation is another key franchise, as is Age of Empires. But more recently we have seen games that do much more than just guide the development of societies and civilisations: games like Railway Tycoon, Zoo Tycoon, and Rollercoaster Tycoon allow us to have design and control a much wider range of human and natural experience.

In Prison Architect you get to be the architect and designer of a prison in the US private prison system. You design, plan, and construct all the buildings, and then control the regime of activities that prisoners must follow, the staffing balance, the prisoner intake and reform programs, and the overall direction of the prison. A five-stage campaign helps you to learn the mechanics of the game while telling a surprisingly engaging and moving story, and a series of grants for each build guides you along particular activities to earn infrastructure and resources. All of the human figures are quite cartooney, so even though they do get into fights and occasionally riots with weapons and blood, it’s not particularly realistic or gruesome in its portrayal. In the combined space it can certainly be unsettling though.

With all of its system design, Prison Architect is quite complex to play. For example, a series of reports allows you to monitor the state of your prison so you can keep tabs on the food, hygiene, clothing, and other needs of your prisoners. You can build canteens/kitchens, yards, laundries, common rooms, workshops, and run education and reform programs to both keep prisoners occupied and happy and get the work of the prison done. (Rehabilitation is really really hard to do, by the way.)

At the same time, it is necessary to employ guards to keep your prisoners in check. These come with many options for upgrading, including tasers, guard dogs, armed guards, surveillance and so on. Along the more punitive route it is even possible to build an execution chamber and have the most serious prisoners on death row. This ability to build the kind of prison you want – rehabilitative, redemptive or punitive – is one of the most replayable aspects of this game.

In fact the system design of Prison Architect is so complex that it is impossible to describe in a short review. There are many different ways of dealing with each problem and the key is balance. This encourages players to optimise their prison systems and thus one of the great educational potentials of Prison Architect is along the lines of systems thinking, a key skills for leaders and knowledge workers of the future. 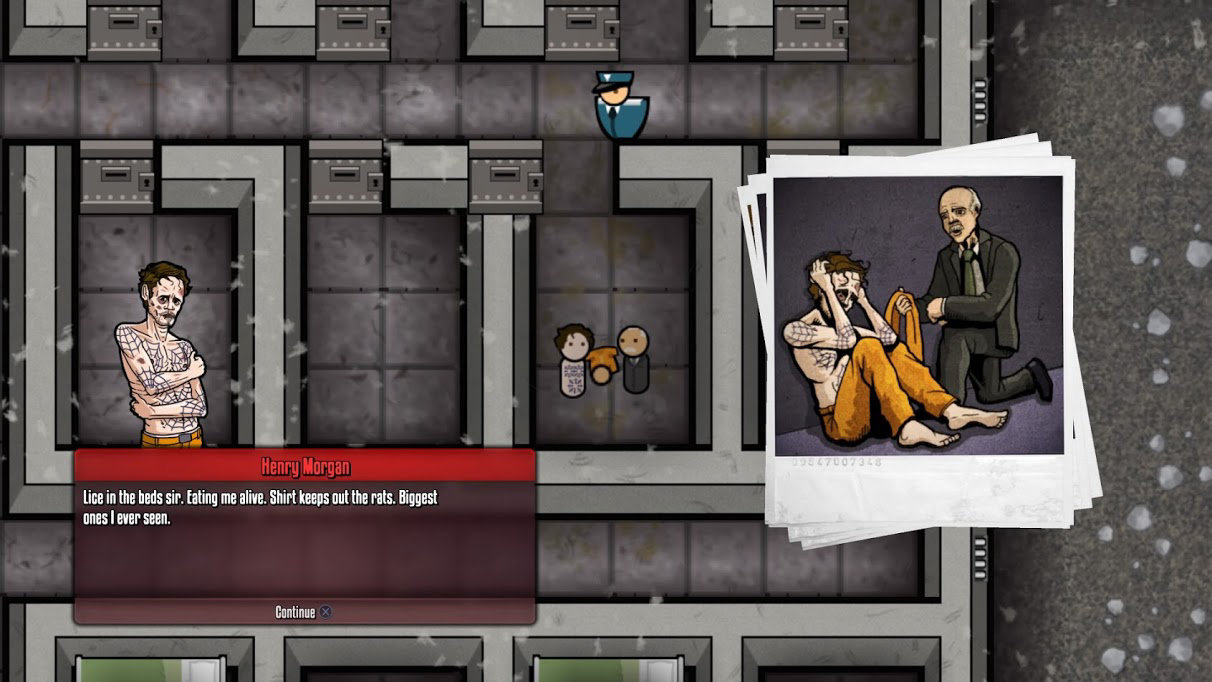 An illustration-based narrative offers a surprisingly engaging and rich narrative in the five campaign missions.

The game also forces you to come to grips with the dehumanisation of inmates in the US prison system: you literally cannot control them or their behaviour at all, you can only shape the environment around them. Like anything else in a private industry the key factor is cash: you receive money for each prisoner you take in, for each day you avoid incidents, and for products that your inmates produce in factories. The labour cost is, predictably, very low. This means that you must face up to the privatisation of the prison system you are in control of, and many of these issues are starkly exemplified in the campaign missions at the beginning of the game. Hopefully players learn that incarceration really shouldn’t be a profitable activity.

However, this is not an ‘educational’ game that imparts any kind of particular knowledge. What it does is provide an experience of a specific type, and with an expert teacher in criminology or social science it would be possible to have very productive conversations or activities around crime, deviance and criminal justice in US society and, by extension, elsewhere. Thus it provides ‘teachable moments’ rather than any kind of direct instruction. Unfortunately it’s not a great option for the Game Truck, but it’s definitely good for discussion about the role of games in society.

Prison Architect is rated M for mature themes and such; although it’s not particularly mature or confronting, it is quite complex in its gameplay and probably mostly suitable for teens and up.  As always though, with some parental co-play it could be a very productive learning experience about both games and society. But for players old enough to play Prison Architect, it’s a challenging and enormously fun game that has way more playability than you might expect. And since it’s an indie game, it’s affordable and offers excellent value, while supporting great creativity in the games industry.

This game was a left-field success for us: what games have surprised you? Comment below!