We don’t usually publish reviews on brand-new games, but I couldn’t help myself here. God of War was released just last Saturday and unusually for me I picked it up straight away. Why the urgency, you ask? Vikings.

Contrary to appearances, God of War actually isn’t a new franchise: like Tomb Raider and Doom and Wolfenstein before it, it’s a reboot that has decided to reclaim the original title. It is actually the fourth entry in the main series: God of War III was released in 2010 to fan and critical acclaim. This is a core series with in the Playstation-exclusive lineup and has a strong pedigree with gamers.

In this series you play as Kratos, an angry angry god who has a vendetta against all the other gods, and basically wants to kill them. The signature design of these games is in the combat, which requires quick reflexes and remembering lots of special moves using specific combinations of button-presses. This is combined with impressive graphics and animation, and especially large set-pieces with enormous boss battles but, until now, not very much story. 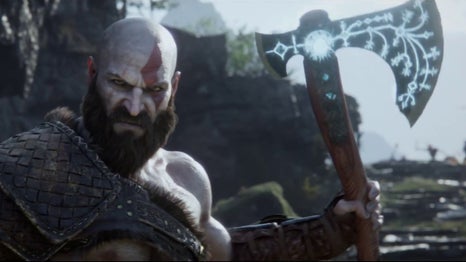 May I… axe you a question?

This is where the most recent instalment of the game has made a big change: rather than just being an action-based hack-and-slash game, the new God of War works much harder to develop a complex storyline and characters. In it, Kratos is mourning the death of his wife and ventures out on a quest with his son – the two obviously have a strained relationship and so the story is about them coming together and the conflicts they experience in doing so. It is a story about fathers and sons, about being a man in the world and about coming to terms with one’s true identity – i.e., a God (or the son of one). All this happens in a far north environment.

This Norse connection is what initially drew me in – with the enormously popular series Vikings on my replay list and a couple of recent trips to Scandinavia, my imagination is captured by the history and mythology of the far northern reaches of Europe. If the truth be told, God of War isn’t in any way an authentic recreation of Viking life – this might be pretty boring anyway since Vikings spent a lot of their time sailing and farming. And it’s a pretty loose adaptation of Viking mythology too, although the main figures of the pantheon – Odin, Thor, Baldur, Jormangundr, and so on – make an appearance. It’s mostly Vikings meets Skyrim in a watered down fantasy slurry, but if you’re not a stickler for authenticity, whatever that is, the trappings of Viking culture are well represented. (For an excellent discussion of the politics of retelling Norse mythology, click here.)

It also plays very well, which is top of the criteria list for me. It’s very much a linear experience, so there isn’t a real sense of ‘freedom’ as you would have in an ‘open-world’ game, but I don’t mind that because the directed experience is wonderfully designed. The gameplay can be quite challenging, but there are lots of options for customising how you approach situations, as long as you don’t mind fighting and light puzzle-based problems. And although I’m not usually interested in narrative within games, this one is quite gripping.

There is no way God of War will be making it into the Game Truck – it’s really very much a solo experience and just doesn’t fit the party environment we have developed for Game Truck parties. It’s also not for younger kids – there is lots of fighting but it’s not necessarily very gory: it just requires a fair amount of skill with the controller. Perhaps one reason for its MA 15+ rating is what you might call ‘adult themes’ in the story – nothing that should be particularly restricted, but some issues around relationships, life and death, and identity that might be perplexing or could bear some talking through with an adult. It is certainly a game that bears playing together – one person playing, one person watching, both discussing it – as we are doing in our house. It would be an ideal father and son experience.

Although it might not be suitable for all players, God of War achieves what it sets out to do, and is interesting for bringing a fully-fledged and mature narrative into a franchise that was previously known primarily for its action. It is part of a broader move towards more maturity and diversity in games that is roundly applauded on all sides – in one writer’s words, ‘God of War Has Finally Grown Up‘.

Do you have a game or issue around gaming you’d like to see reviewed or discussed on this blog? Let us know! Email chad@gametruckaustralia.com.au, call Chad on 0433 318 001 or connect with us on Facebook.