Ask a Gamer 7: An RPG Primer

A friend and business colleague asked me recently:

How does The Witcher III compare to Skyrim?

He had obviously seen my recent Facebook updates on what I am currently playing. Before I go into the comparison, it might be useful to explain that both games are very well-known example of digital Role-Playing Games, or RPGs.These are basally video game versions of the old Dungeons and Dragons that some of us used to play with pen & paper, where a Dungeon Master would tell a story and players would act out their roles, taking actions and rolling dice  to try and succeed in those actions. They usually take place in a fantasy setting, with elves, dwarves, dragons, and castles, though RPGs can take place in science fiction settings, or others.

Skyrim (aka The Elder Scrolls V: Skyrim) is the most recent in a long line of fantasy RPG video games, going right back through the Elder Scrolls series. It has a strong focus on character customisation, with a number of races and classes that you can choose (along with your appearance) at the beginning of the game. It is known for having an exorbitant amount of content: it is said that the main quest and all the side quests could keep you going for over 200 hours. Developed by the very large US-based studio Bethesda Softworks, it was released to massive hype and strong critical and popular success in 2011, and it still holds up very well.

The Witcher III is the third in a series by the relatively unknown CD Projekt Red, a Polish developer. An immediate difference is that you have less choice in your character development: you are stuck with playing as Geralt of Rivia, and the narrative follows the previous games in the franchise much more closely than Skyrim, which is largely just set in the same world. Geralt has a narrower range of skills and abilities than those you can choose from in Skyrim, but it doesn’t feel too restricted, and all this allows the game to develop much richer plot lines than more open-world offerings.

While both games have extremely rich narratives that you can explore at will, the world-building is very different. While Skyrim has a recognisable epic/High fantasy aesthetic, The Witcher III is much darker, drawing as it does on Eastern European folklore rather than a kind of vanilla Tolkienesque vibe. The demons and hags in the Witcher III are much creepier and darker, which gives the game a genuine distinctiveness in a genre which can become a bit saturated. Both human and supernatural evils have ravaged the land, and the environments reflect it.

One major difference is the player’s perspective: in Skyrim you play mostly in first-person mode, meaning that all you see are your hands (or weapons) in from of you. This is much more immersive as the world takes up more of the screen. However, The Witcher III has you in third-person mode, meaning that you can see the full body of Geralt. This makes it more like watching (or controlling) a film, and the combat is much more engrossing. The Witcher III also has more action-oriented gameplay, where you can dodge, roll, and perform a variety of attacks, all of which makes the combat highly engaging and dynamic. 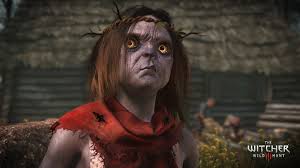 Having said that, the Witcher III doesn’t have quite the same level of polish as Skyrim. Geralt can hardly jump, and he gets stuck on objects on the ground, which can be pretty frustrating. Objects are not as easy to pick up and ladders prove more difficult to negotiate, whereas all the movement in Skyrim is extremely fluid and problem-free. This is perhaps the major quality difference between the games.

Parents should also be aware that The Witcher III is much more adult in action, sex scenes, and tone – see more detail from GeekDad. It is rated R 18+ for a reason, and although Skyrim was admittedly released before Australia had an adult rating for games, it is still far more accessible and appropriate for under-18s. As always, the top recommendation is to look closely at any game and play it for a bit together with younger players to ensure its appropriateness.

It’s hard to compare the two games; forced to choose, Skyrim has just a bit more polish, bit the uniqueness and exemplary storytelling of the Witcher III make it unmissable. If you liked one, you’re sure to love the other.

No Replies to "Ask a Gamer 7: An RPG Primer"